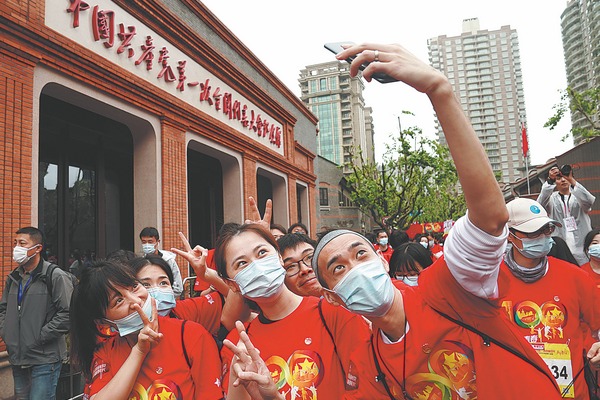 Cai Songxuan, a 23-year-old graduate student, did not expect tears to flow as she watched a short video on military affairs in a panoramic theater at the Chinese Communist Party Museum in Beijing.

But the presentation was too powerful, too real, to hold back the tears. With images of planes dropping bombs above them, blood splatter in a river, and clouds of smoke rising from a burning forest, Red Army soldiers kept the order by crossing a floating bridge, carrying stretchers and supplies.

In another scene, a soldier tried to wake his dead comrade on a snow-capped mountain. Others were buried by an avalanche.

The theater itself was interactive, with snow and cold wind blowing through the room and tremors shaking the audience as the bombs exploded.

The story of the Long March was portrayed on six giant screens that provided images from the ceiling above to the walls all around. The 3D effect, background music and realistic feel provided an immersive and thrilling experience.

“It was like traveling back in time. We can feel the pain and hardships the Red Army went through,” Cai said, recalling a visit to the museum in July with his classmates. “I couldn’t hold back my tears.”

She had visited similar museums before, but they all looked alike to her. But not this time.

“The innovation here gets rid of didactic historical education and invites us to learn and feel the Party stories and the spirit of past generations,” she said. “I don’t want to see museum posters alone. I want something that I can be a part of.”